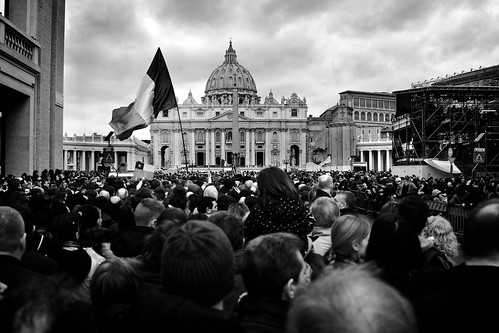 Two hundred thousands devoted Catholics from all around the globe have gathered today in piazza San Pietro for the first Angelus of Pope Francesco. The Angelus is an ancient prayer that should be recited three times a day, at 6.00AM, at noon, and at 6.00PM. Since the existence of television, the Pope has the ritual of saying the Angelus every Sunday at noon from a window over piazza San Pietro. Before and after the Angelus, the Pope addresses the crowd in the square with a speech. So, you see, the first Angelus is also the first public speech of Pope Francesco to the Catholics after the few words he said the day of the election. That’s why so many wanted to be present at the event.
In the current hyper-connected era, whenever I am in such a huge crowd, I immediately know that a way larger crowd is also participating, from all around the world, by watching the same event (and probably from a better view point) on TVs and internet. Pope Francesco acknowledged this feeling by saying, at the very beginning of his speech, that “this square has the size of the world”. Then he spoke about mercy, stating that “The Lord never tires of forgiving us, but sometimes we tire of asking for forgiveness”.
The crowd is really crazily in love with this Pope. There are very high expectations for the Pope of the records (the first missionary, the first from South America, the first with the name of Francesco, etc.), hence the global attention to every public appearance. I could really feel the high hopes warming every attendant, their certainty to be present at an historic moment, and their joy to be there.