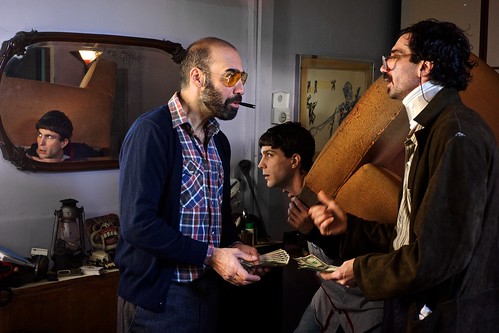 Getting up early in the morning behind the wheel and driving for two hours and half straight through the mountains would have put me in all but a great mood if it wasn’t that:
1) I had an interesting photo-shoot scheduled for the whole afternoon-evening;
2) I received an incredible email while on the road.
Point two will be discussed in a future post, today let’s focus on point one, since it’s related with the daily shot, OK?
One week ago I started working with Mario Sgueglia and his fellows on the photographs from the set of their upcoming play, the “American Buffalo” of David Mamet. While usually these kind of photos are taken directly on stage while the actors perform the original play, Mario and the others wanted to create something different: we shot out of the stage, showing what their characters did “before” the play. They are all scenes from stories they talk about during the play, so the idea is that the audience will recall the meaning of each shot “after” having seen the show. I think it is a brilliant idea, refreshing and engaging.
One week ago we shot the exteriors, that is, the street life, the bowling, the casino, the hippodrome, the fast food, and the fun-fair. Today, it was the time of the interiors, with the poker game, Don’s birthday party, and so on. The two days where (photographically) completely different for two main reasons:
1) While shooting the exteriors, we where in Rome-2012, surrounded by Roman-citizens-2012, but we had to give each shot the appearance of Buffalo-1975, lived by Buffalo-citizens-1975; plus, we didn’t have any control over the lighting conditions (I didn’t want to use external lights not to attract too much attention from the people around us, especially the owners of the various locations).
2) While shooting interiors we could work on each piece of furniture, on each character appearing on scene, on the whole lighting conditions, that is, we worked on a set.
I can’t really tell which one of these two situations I loved best, they have been both a real thrill and a lot of fun. Working on a set gave me the opportunity to experiment more with lights and angles of view, but working in the outside world gave me the opportunity to play with natural lights in order to get cinematic effects to each shot. Plus, I had the opportunity to photographically visit a lot of different locations in one single day.
All said, you can now find these shots on the official blog of the show and on its facebook page. A new picture is posted daily, so if you like what you see today please keep coming in the next days, because new material is going to be waiting for you!