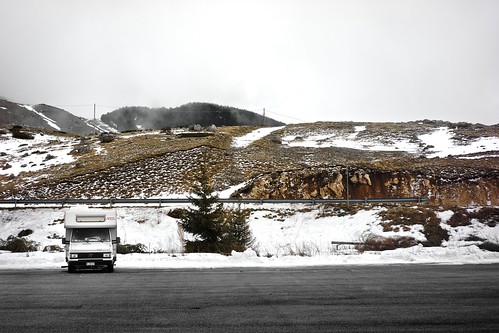 There are many disturbing things in this picture, I guess, or I’m simply a disturbed observer of simple views.
But, come on, in the city such a landscape would represent the extreme poverty of people forced to live at the periphery of society, all their world collapsed in the tiny space of an old and presumably dirty and smelly caravan, surrounded by depressing and uncanny landscapes which complete the picture of a life without any future.
Here in the mountains, parked in front of a medium expensive ski resort, it depicts a medium adventurous family which was wealthy enough in the eighties to afford a fully equipped caravan and which is still able to enjoy some all-but-cheap skying holidays.
The same scene hence depicts both who has way more and way less than essential in life. We are talking about a slight change in context, and the result is totally different. Sure, I didn’t exalt neither the holiday or skying attributes of the situation, and you may feel cheated, but I didn’t either enhance the squalor or poverty look of the scene, this is really how the landscape looked (sure, the fog helped quite a bit).
So, my point isn’t how much the de-contextualizing power of photography makes it easy to produce misleading images, because in the year 2013 we all know that, but rather more how much two completely different worlds can in some circumstances look so similar to each other. It’s a disturbing sense of deja-vu the one I feel the whole time I walk around this caravan, trying to figure out what exactly is it that gives me the creeps and how should I shoot it to tell the feeling.
Maybe this is why I never really liked caravans.