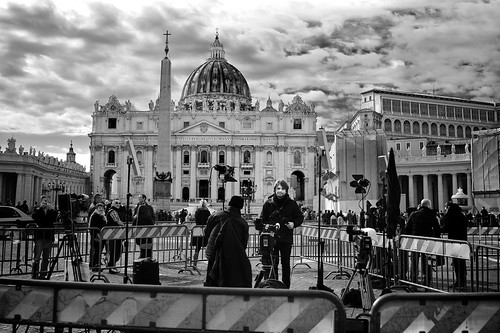 It is a very delicate time for the Catholic church, in a very delicate time for the whole Western World. Only a few times in history were all of our values together with our political, military, and economical influences put in such danger like they are in these days, and nothing peaceful ever came out of it.
So, I guess that most of the attention that the media from all around the globe are devoting to the new Pope has more to do with assessing the health of the Catholic church, knowing that it is directly related with the equilibria of the whole Europe and, with it, U.S.A., than with plain curiosity about the Christian faith.
Indeed, it is just one day that Pope Francesco is around and there isn’t very much to say about him, so the medias are going berserk with any info about his past, while “religiously” waiting for any new item in his agenda, hoping to get a good view of him or to hear from him anything newsworthy.
Obviously, such a massive presence of the media isn’t exactly unnoticeable. Even with three huge designated stations, one in front of Castel Sant’Angelo, one facing the cathedral of Saint Peter’s , and the last one on the top of the Vatican City, yet there isn’t enough space to gather all the journalists that literally flooded the city. So, if you have a walk around the Vatican in these days you’ll see tons of TV troupes staging their news anywhere they can, and photographers harassing almost anyone who wears a robe.