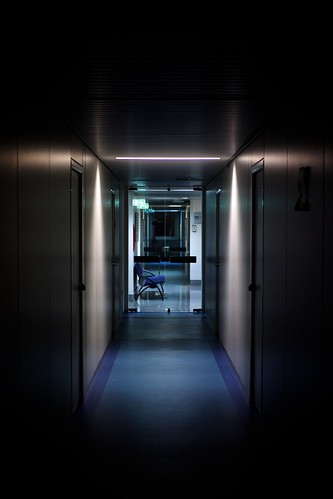 I’ve been recently moved to a new office, colder, darker, and farther from the scientific directorate. It wasn’t a punishment, they had to use half of the building where I was before to build new labs, but yet it doesn’t feel totally right. We’re always talking about loosing benefits.
Anyway, the cool thing about the new office is that it is located in such a depressing building, connected by such depressing corridors, lit by such depressing lights, and made out of such depressing materials, that after all it looks kind of cool. Especially in the evening, when it gets desert, barely lit, and basically creepy.
Fact is, the general mood in the company matches perfectly the place. The cuts in the National funding and the enormous delays in Regional payments put the owners in the position to announce a full closure of the thirteen clinics by the end of the year. It’s a general opinion that there isn’t a real will to close anything, that this thing is basically the hard way to negotiate, but the 31st of December is quickly approaching and there has not been any good news yet.
I’m not talking about panic, but some ill-concealed fear and freaking discomfort are starting to show up in people’s faces.
Tomorrow we’re supposed to have the annual Christmas toast followed by a speech from our President, and I’m really curious to see what it is going to be about…