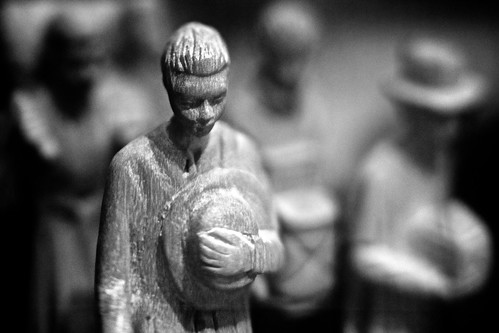 Presepe (which wordreference.com translates into nativity scene) has been my favorite part of Christmas decoration for a long time. All my childhood I would stare (and study) the ones exposed in each and every house. I think it was already there, my instinct to create (artist) and construct (engineer): my best loved Presepi (that’s how we spell the plural) were the most complex ones, with real water streaming out of miniature fountains, little rivers, or even waterfalls (!). And fake fires, there were so many ways of tricking the viewer to actually see little fires in the little fireplaces in the little houses. And I liked the ones with fake perspective, that is, large houses and characters in the foreground, small houses and characters in the middle-ground, and a painted scenery of hills, towns, and a starred night in the background. Another element I was always intrigued by was the Stella Cometa (the comet). It’s not easy to represent such a thing, and while most people would go for the traditional big, golden, five points, long tailed star, others opted for a more realistic large ball of fire with a long smokey tail high in the sky. After all, being creative doesn’t mean you must ignore physics, does it?
Anyway, I got quickly fed up with all this fancy stuff when I turned into puberty. Suddenly, that dreamy home-made world which told the story of the very first day of life of our savior, become just a bunch of ugly looking, bad industrially crafted, and inaccurately dressed/skinned toys good only fo old people and stupid kids. For how annoying this can sound, that’s basically how puberty works, at least mine. What is really sad, is that when I finally got out of it, more or less ready to be an active member of the human society, I couldn’t turn back at the things I used to love as a kid without remembering how much I hated them as a teenager. The magic was broken.
But I found a way to reverse, at least to some extent, my post-puberty spell, a very simple thing that puts me again into believing a bit about all the crap I loved before, or at least to act as I do. That is my daughter. No matter how horribly unpleasant my teenager self could have been, and what nasty things he could have said about all the kids’ stuff, seeing Agata loving them, or even just waiting for Agata to be old enough to love them, makes me love them again.
As simple as that, we return kids when we have kids. Sure, there’s an awful amount of responsibilities included in the combo.