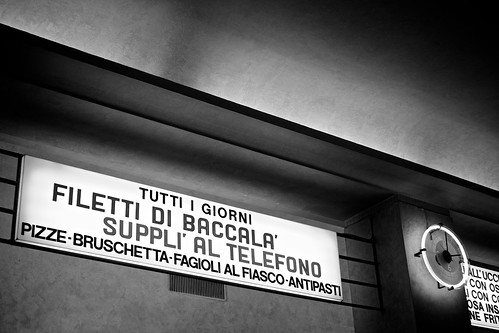 Horrible hangover. This is how to sum up half of my day, today. I took two painkillers, and yet my head was exploding. I ate a 250gr of pasta dressed with olive oil and parmesan, and yet my head was exploding. I had two fried eggs. And yet my head was exploding. I drunk half a bottle of red wine (I didn’t have much work for the afternoon!), and yet my head was still exploding. Eventually I took a third painkiller. Fell asleep.
And then is when the second half of the day begun. With so much wine and painkillers in my body I was all numb and dumb. I dressed up and left my apartment for the night.
I have a couple of friends from the Netherlands who are staying with us for the weekend, plus my best friend Michele, the one who left in February to go working in the States, is back in Rome for a few days. So, despite being so “comfortably numb”, I took the tram and got to Trastevere, where one after another all the crew members gathered. There were also a couple of friends I didn’t see since Michele left, you know how these things go, when there’s a friend of a friend you see often and then, when the “middle” friend leaves you lose track of each other.
We had many drinks, a couple of aperitifs, a quick dinner, and then many other drinks. Michele is fine, he came with his boss which turned out to be an awesome guy, originally Hungarian, grew in the Italian-speaking side of Switzerland, now working between Boston and Lyon, and, what’s more important, very fond of Michele. The friends from The Netherlands had fun too, one is a Scottish guy who now happens to come to Rome every three-four months for his job, the other is an Italian girl from Puglia which had never been in Trastevere before.
We closed the night at Pizzeria dei Marmi, one of the few places in the city where you can have a good pizza cooked in the proper oven till half past two in the night. It’s perfect to fight the hangover of the day after, and it’s an interesting place too, you can imagine how different are the people you can meet at two in a pizzeria. Fellows like us, trying to sober up before going to sleep, and weird fellows, actually starting their night life with a pizza…
Anyway, I’ve been a bit numb all night long, and a bit moody too, because I wasn’t accepted in a photographic competition I was kind of looking forward to. So, here’s the daily shot. It’s two o’clock and I’m sitting in this strange place, waiting for the pizza which will finally put me asleep.