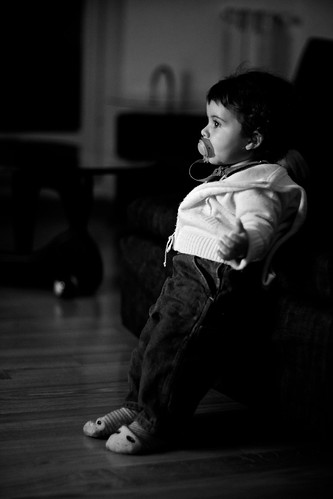 As any kid, Agata loves to watch the television. She also loves laptops, mobile phones and tablets. I guess that’s usual too. So, now she goes around the living room looking for the remote, she grabs it and brings it to us, waving with the other little hand towards the tv. It’s hilarious. As any good horrible metropolitan parent we use the television for what it was intended, that is, as a helpful babysitter for the times in which we can’t stand to play with her.
At first solely the nursery rhymes of BabyTv were able to keep her busy. They were colorful, with easy songs, and they were short enough to keep pace with her restricted attention span. Whatever longer than two minutes, for how simple, colorful and cherish it could have been, would have eventually appalled her. But yesterday evening, while watching her pre-bed television programs, Agata stumbled upon the Teletubbies.
OK, I have to study that tv-show, because it’s the most baby-addicting thing I’ve ever seen. She got completely paralyzed, eyes wide opened, besides attempting some steps whenever the teletubbies would dance. The magic lasted exactly as long as the show, as soon as the credits started rolling she was released from the spell and turned back at us.
Creepily effective.
Who knows which messages are those huge, deformed, alien babies actually sending? I couldn’t figure out most of the things happening on the screen.