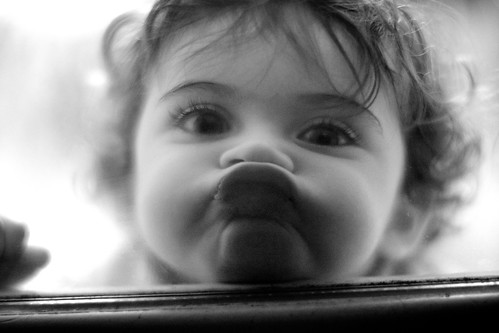 These days I’m working a lot. And when I’m not working, either I’m at the studio testing new poses and light schemes, or I’m playing with my daughter. Finally, after almost fourteen months since she’s born, I can actually say that playing with her is fun. She’s now in that phase in which babies evolve into clowns, just before evolving into kids. It’s the magical age in which they understand everything and yet don’t care about anything else than love, food, and playing. No shame, no resentment, no judgment. Just tenderness and fun. If paradise exists, everyone in it has this age, forever, and angels are just a lot of papas and mamas. I can’t really think about anything better.
Anyway, playing with and shooting pics of my daughter at the same time isn’t easy at all. Agata is now very fast in standing up and running towards you, she especially loves to crash on the camera and jump on my laps to watch the photos on the nex little screen. Or she just bangs whatever she’s handling on the camera’s lens. Either way, I need always to put something between the camera and her to prevent damages and to keep a proper focusing distance. Tonight, as the last time, I used a window.
However, while two nights ago she didn’t expect to find me on the other side and I could use the little time she spent staring to take her portrait, tonight she started immediately putting up her show. She started banging her hands on the window, showing her mother I was outside, and then she just smashed her face on the window and started doing crazy faces… like a natural clown.