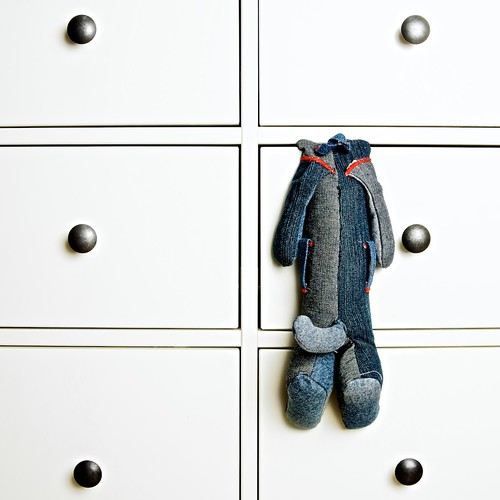 Last Christmas my sister gave Agata a doll which looks like a dead bunny. I know this sounds awful, but the doll is actually really cute. It is not even a real doll, I think it is supposed to be left in front of the entrance door to keep the cold air from entering in the house.
Anyway, this jut-dead-dumb-looking bunny reminded me of the nice comix book of Andy Riley, “The book of Bunny Suicides” (if you are not familiar with Andy’s work, give a look here, the book is sold by Amazon).
In my opinion, Andy’s book is a collection of astonishing stupid ideas. I mean, I’m sure each one of the person on this planet felt, at least once, like the suicidal bunny when he/she realized how stupidly wrong he/she was doing. Like actual suicidal attempts, as when instinctually you try to get the bread crumbs from the toaster without unplugging it (it happened to my wife, luckily the circuit breaker worked perfectly), or just plain stupid, as when you forget the keys on the lock with you infant baby still in the house (this happened to my parents, apparently I had to be rescued by firemen). A stupid idea which goes so terribly wrong to cause a fatal outcome shouldn’t be funny, and yet the Darwin Awards are here for this. If you are not familiar with the most politically incorrect award EVER, they are given every year to the man or woman which, with his/her stupid death, made an important contribution towards human evolution (by not spreading his/her genes anymore). I mean, you can call bad taste here, but some of the winners are really more magnificently stupid than the suicidal bunny Andy’s drawing.
So, here’s my contribution to the science of bunny suicides, what happens if you linger too much in putting you head on things that are known for being suddenly closed. Or metaphorically, what happens if you wait to much in taking a decision: you can get stuck to death.