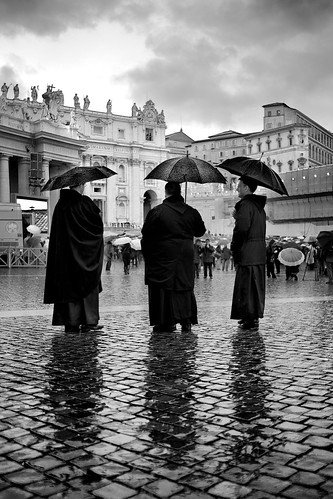 One month after the beginning of the “365 Days of RX1 – one camera, one lens, 12 projects”, the first theme is over and a new theme has to be announced. After looking at myself for so long I now really feel the urge to stay behind the camera and find a story to tell, out in the streets. And you know what, there is something happening in the streets of Rome that is currently followed by all the televisions of the whole world. It is the election of the new Pope, the head of the Christian Catholic Church.
The election of any new Pope produces wide effects to my city. The streets densely crowded by pilgrims, the churches all busy in celebrating, the Papal coronation, the first Angelus, and many other events will put the Catholic church and religion at the center of any TV and radio show, newspaper article, and any chat or discussion.
The new Pope has been elected today, in the Sistine Chapel, in a sequestered meeting called a “conclave” (so called because the cardinal electors are theoretically locked in, cum clave, i.e., with key, until they elect a new Pope). Two days of meeting were necessary, during which the cardinals have voted five times to reach a majority of over two-thirds of votes. And when they did, the Argentinian cardinal Jorge Mario Bergoglio became the two-hundred-sixty-sixth Pope with the name Francesco.
The new theme couldn’t have other title than “Habemus Papam” (we have a new Pope). In this theme I will follow how the election of the new Pope will affect the city for the next thirty days, and to look closer at the relationship between Rome, Romans, and the Catholic religion.