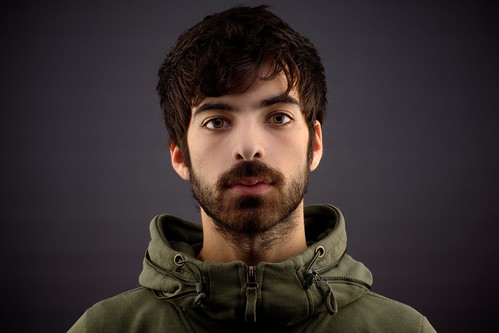 As expected, this morning I woke up in a horrible state, with fever and some of the other nice things that feature any respectable flue. I took a few drugs, tried to fight the flu back, but eventually went to bed again around noon and slept till late in the afternoon. When I woke up I didn’t know who I was, where I was, or why I was, but the fever was gone. One hour later I was back on track, working on a few documents for a new research project and thinking about the pic of the day.
At Rossini Photography we have a pupil, a boy who sometimes comes to our assignments as second photographer or to our studio to take part to the post-production. He says that he learned and still learns a lot from us, which makes me really happy since he’s the little brother of a very good friend I have since high-school and I somehow saw him “growing up”. You can find Andrea’s personal work on Flickr, but he’s mostly active shooting live music events for Sottopalco, one of the major agencies for live music photography.
Today Andrea was at our place to study post production of wedding photos. Since he was there, it was inevitable that the daily studio shot would have had him as the subject. He was happy to be the model both because he’s a fan of the 365 project and because he was curious to see how I work with the studio equipment.
For this shot I tried a new, very symmetric, light scheme. I put one strobe at both subject’s sides. Equally distanced, equally powered, equally equipped with a 60×60 softbox. This setup provided a lot of textures on the hair and the jumper, and created a symmetric T shadow on the subject’s face. I used a third strobe as fill-in, hanging over the subject at 45° and equipped with the 120×80 softbox, no grid, vertically oriented, to reduce the t shadow and get some light on the eyes. I unrolled the white vinyl background as for all my latest close-up portraits.
Now, what I like of this light scheme is that it resolves for a lot of textures and details while keeping the illumination really soft and smooth. What I’m not sure about, however, is the amount of light on the subject’s eyes, which I’m not sure to be enough (for sure it is much less than with the other schemes). What do you think?