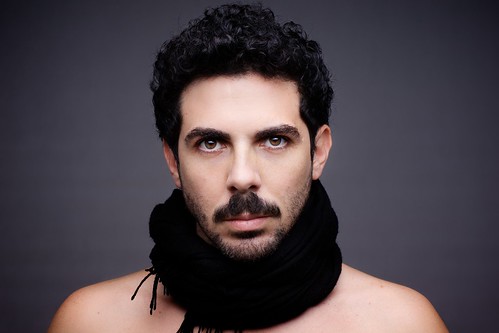 Agata infected me with the flu, so today I worked from home. I sneezed, I coughed, and my throat ached. I wore a scarf all day long. The weather surprised us with extremely strong winds, which made my throat ache worse whenever I looked out of the window. My mood was still a bit affected by the events of yesterday so, by all, it was a very calm and sleepy day.
In the morning I found half an hour to test a new, complex light scheme I had in mind, and Claudia offered to model for me. I used soft light coming from the 120x80cm softbox with the grid to lit the hair, a snout to lit Claudia’s face, and another strobe to lit the white background. The result was interesting and very promising, something quite theatrical and truly dramatic, however I don’t feel I mastered the scheme yet and I’ll try it again in the next days.
In the afternoon I got an idea for another scheme, very simple, basically a simpler version of what I used with my sister. Claudia, however, refused to participate to the shot because she was overwhelmed with work. So I decided to go for a self portrait, my first self portrait with the new studio equipment. You can see here the result, a bit zoolander-ish, maybe even twilight-ish, but still quite effective, I think.
The background is still the white vinyl one, and there’s just one light, frontal, horizontal, at half a meter from me and 45 degrees over my head. I used the 120x80cm softbox, but I removed the grid to get the light to spill a bit around. I focused using the distance meter on the lens (I was around 1.20 m from the camera), I set the ISO, the shutter and the aperture, and then I used the remote to control the camera and the iPad to review (online, thanks to the EyeFi SD card) the shots.
It took me five or six shots to get to this one, during which I tried to apply some of the posing techniques I always explain to my models. However, I couldn’t stand more shots because I was chilling and my throat was killing me.