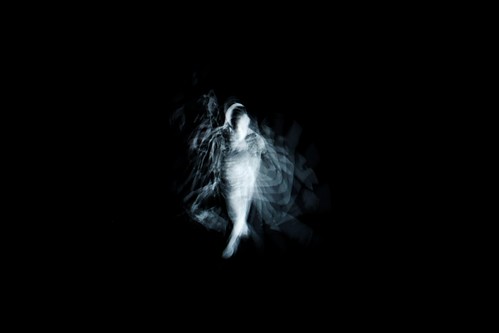 A few days ago I got an assignment from the Romaeuropa Festival to shoot some of the pieces displayed at Digital Life 2012 for the catalogue of the exhibition. Since I had been at the exhibition a few days ago, I remembered the pieces, all video art ones, when they listed them over the phone, so I arrived at the museum both technically and stylistically ready.
The first piece was Lech Majewski’s “Bruegel Suite”, a series of “living paintings” in which the artist puts into life one of Brugel’s paintings. For the piece I tried two different representations. In one I have long exposure of around four seconds to show how some of the elements of the painting are, in fact, fixed, while others are in motion (blurred). In the second approach, I shot three photos in three different moments to show how the painting “is never the same” and tells, in fact, a story. I’m going to deliver both the results and see what the dudes at Romaeuropa like better.
The second piece was Marina Abramovic’s “Insomnia”, a conceptual dance piece in a minimalistic environment, basically a curve of light cutting through the darkness and the dancer moving in between. No long exposures here, since I wanted to return the sharpness of the lights and shadows on which the artist based the whole piece. A set of three or four photos will tell the story of how the body of the dancer interacts and modifies the video-space.
The last piece I was asked to shoot was William Forsyte’s “Lectures from Improvisation technologies”. This was my favorite piece already when I first enjoyed the exhibition, so I was extremely delighted to be the one responsible to “show it” in the catalogue. It is a smart, inspirational, surprising and extremely educational video in which digital technologies are used as aid elements to show how a dancer in fact interacts with non-existing physical objects to create coherent movements in the free-space. These aids add so much to the show, basically offering the viewer a hint of the intimate world in which the dancer lives and moves during his piece.
Now, I can’t show here in the blog any of the shots I took for the catalogue, it would definitely be rude, but since I already knew that while I was doing the job, I took an extra photo-lecture of the Forsyte’s piece, just for (you and) me. Long exposures of tape recorded video produce peculiar effects on photos, the one that Balla and Boccioni already explored in their futuristic paintings around one hundred years ago; effects that I never captured till today since tape-recorded videos got out of my life before photography got in (professionally). The shot here is an over-impression of several frames showing the dancer from above, you can see how the improvisation gets decomposed into it’s “time samples” and how the dance “uses” the space around him.