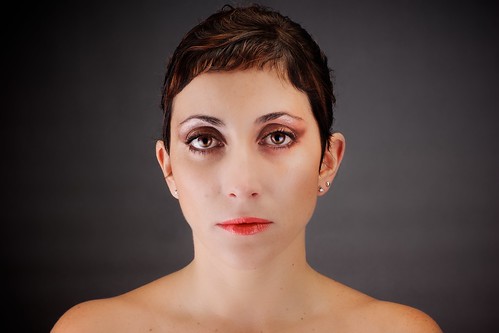 My studio agenda today reads: close-up portrait on a grey background. Luckily, Claudia accepts to help me by modeling for the shot. It takes me around half an hour, several argues (the model is my wife, after all), but I eventually get the result I was looking for.
By getting the model (and the lights) one meter far from the white background I got the right tone of grey and vignetting. The model is lit by two strobes and one silver reflector. The main light is on her right, almost lateral, from the 120×80 softbox with the grid. The hair-light hangs over her head, not exactly central but slightly on the front. The reflector is on her left, almost lateral. Once everything is set, the model looks like in a light cage.
The goal was to get an even light which still resolved some volumes and tridimensionality, and I’m pretty pleased with the result. I still have to work on a couple of more poses in the next days, but only after I’ll have found a way to fix the white background from self-unrolling whenever I lower it for more than one meter and half. It’s particularly bothering because it limits me in the use of the white background, I can basically shoot solely close-ups and horizontal portraits.
Since my agenda reads much more demanding poses to be studied yet, I’ll have to cope with the background as soon as I can. Probably a little hook on the wall where I can fix the chain, so it doesn’t roll freely. But I hate hooks on the walls, because as soon as I put them I usually immediately start scratching my arms and injuring myself. I tried already making the chain longer so to give more grip to the weight that hangs from it, but with scarce results. If you have any idea of or experience in how to fix a background from unrolling freely, please speak soon, cause otherwise I see the fearsome hook coming to my wall in the close future.