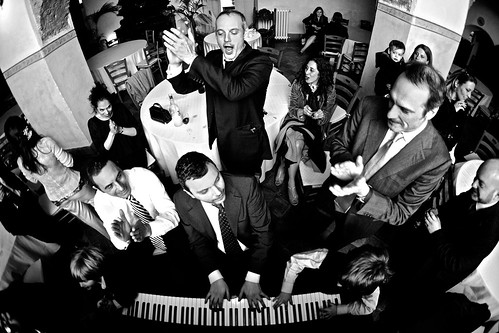 First things first: thanks so much to Valeria and Daniele for choosing us to shoot their wedding and for being such sweet people. Big hugs and best of luck to you, guys!
The NEX-7 found its way to be used at weddings as a small, lightweight, fisheye camera. You never know when a “fisheye moment” could happen, and having such a camera at hand is very convenient. Considering that a in a weeding day I usually spend 10 hours weight-lifting at least 3kg of fullframe dslr with 24-70 f2.8 and a battery-pack, the extra load of carrying around the fisheye-NEX-7 is almost non-existent. And its being so small and inconspicuous makes it possible to shoot at very short distance from the subjects without having them freeze in front of the camera. Like in this shot: I heard the sound of tipsy guests singing old songs along with uncertain piano lines while I was out shooting the last portraits and details (with the bulky dslr). When I reached the “crime scene” I knew I couldn’t point the big camera at those people without ruining the mood. So I walked behind the piano, kind of hiding my self back there, and I put the fisheye-camera above my head, peeking at the swivel screen to compose the scene. I wanted to get everything in the scene, from the hands of the player(s) over the keyboard to the tipsy crowd dancing, singing, and drinking all around. And here it is.