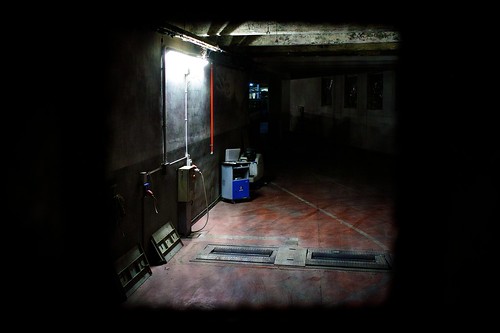 Peaking from a broken window to take a look inside the underground of a bus depot. A depot for public buses (A.T.A.C.). This neighbourhood got stuffed with public depots: police, municipal police, bus, fire fighters, and probably some more that I didn’t spot yet. And most of them (if not all) have the same, rotten, abandoned, industrial look. Basically they all look as if they were the set of a Japanese horror movie.
Kneeling behind parked cars, pushing the camera among the broken glasses, I would have looked quite weird to the few pedestrians walking by, but the parking was so deeply dark that nobody noticed me, at least until I stood up. Then there was at least one woman who silently freaked out and doubled her pace to get as quick as possible away from me. If I were with the dog I would have more probably looked as I was collecting faeces… that was actually one of my tricks.