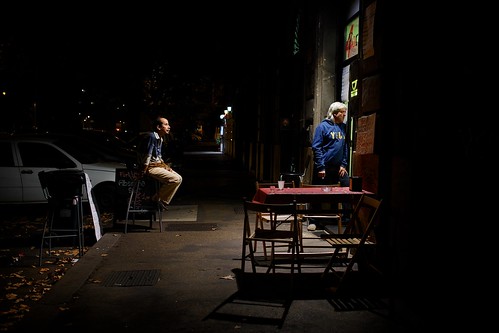 It was February 2012 when I started my first photoblog and my first 365 project with “365(+1) Days of NEX-7”. My life was totally different back then, different house, different neighbourhood, different job, different everything. I started it because I needed to force me to photograph more regularly and I thought that a 365 would have been a great exercise. I had no idea of what I would have produced at the time, all I knew is that I wanted to produce something and I was tired of taking out the camera only during holidays and celebrations.
The third day of the project I was already so busy with work and family that I could grab the camera solely at night, when it was my turn to walk out the dog. I brought the NEX-7 along and I took a few night shots of the neighbourhood. I liked the results. For as busy as any day could have been, I would always have to walk out the dog at night. So, bringing the camera along became a routine. I started to realise that walking the dog was actually a good thing, since people didn’t worry about what I was doing in the darkness, they would just assume that the dog was setting the path and I was just the guy who follows the leash.
The set of photographs which came out from this routine is where my series “Momentary Suspended” comes from. Among my series it is so far the most autobiographical, with every scene deeply bounded to my life and the events who brought so many changes in the last year. And I took most of those photographs while walking out my dog Lucy.
Lucy has been with me since she was two months old and I was attending my first day at university, she was with me while I was dating all the important girlfriends I had in my life, she was with me when I left my parents’ home to move in with Claudia, she was with me when I Claudia and I married and she was with me when we moved to the Netherlands for two years, she was with me at every job I did, she was with me when we moved back to Rome but in a different apartment and a different neighbourhood, she was with me when Claudia got pregnant, she was with me when we moved back to our first home, in our old neighbourhood, she was with me when Claudia gave birth to Agata, she was with me when we moved to the new house in the new neighbourhood on the opposite side of the city, she was with me when I left my job and my past and my titles to follow my pure passion and try to be a full-time photographer, and then suddenly she left me. We stayed together for more than fifteen years, during which we walked out together almost every day, there were different homes and different neighbourhoods and different friends and different everything but we stayed together, sticked together, and I wouldn’t have started doing some important photography if I didn’t have her to walk me out every night.
She left me around one month ago with a void so big in my heart that those who never had a real animal companion in their life will find hard to believe. She left me and all that remains are the memories and those shots I took during our night walks. In one I got to picture her. That photograph is currently exhibited in (the cafeteria of) an important museum of Rome, the Chiostro del Bramante. My dream is to place, some day, that shot in the permanent collection of a museum, so she’ll be there forever.
Now I feel I need to start night walking again. With no dog and no leash I’ll probably be seen as the creepy guy with a camera in the darkness, I know that. But I really feel I need to move on and explore my current neighbourhood as I did with my old one.
Also, the RX1 is one of the best low-light camera-lens combination currently on the market and I haven’t really stressed this feature yet.
So, for the next thirty days I’ll be exploring the area of Trastevere, Testaccio, and Porta Portese at night and try to tell a bit about these neighbourhoods and its inhabitants. I know I’ll feel the absence of Lucy very badly, I just hope that void will inspire me.