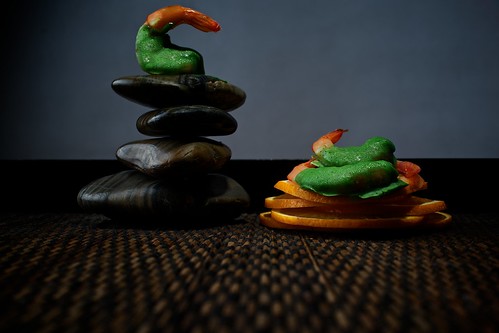 “Equilibria” Menu, forth recipe.
The Chef Lorenzo Mazzoni says:
Shrimps Frosted with Wasabi Chocolate (“Code di Gambero glassate in Cioccolata al Wasabi”).
The Western interpretation of Japanese sushi should have ended a long time ago, considering the many “monsters” it generated, which should have remained a secret in their inventors’ heads. And yet, who knows why, we still try to innovate sushi. In this recipe the concept is quite simple: the pink shrimp has a delicate taste that drifts towards caramel-sweet keys, which go well with the tender taste of white chocolate. The wasabi flavouring added to the chocolate in the tempering phase is an homage to the Japanese culture and its cultural dominance on anything which regards raw fish, while at the same time being a majestic awakening for the palate.