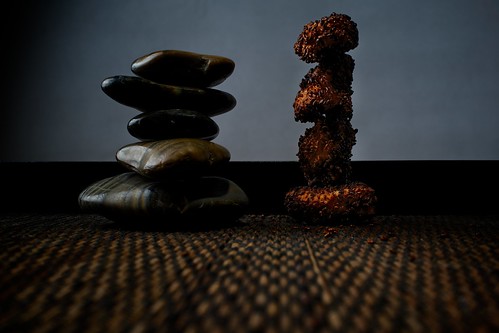 “Equilibria” Menu, third recipe.
The Chef Lorenzo Mazzoni says:
Sesame Crusted Rabbit Nuggets (“Nuggets di Coniglio in crosta al Sesamo”).
There’s a moment in everyone’s carrier in which one has to admit his or her (creative?) fixations. For example I’m clearly obsessed in working on tastes to create the suggestion of those “classic” recipes which inspired me. The crust of sesame, which wraps simple pieces of juniper-marinated rabbit meat, has the peculiarity to remind, once the seeds gets rusted in the 180 °C frying oil, a subtle scorching typical of the barbecue.