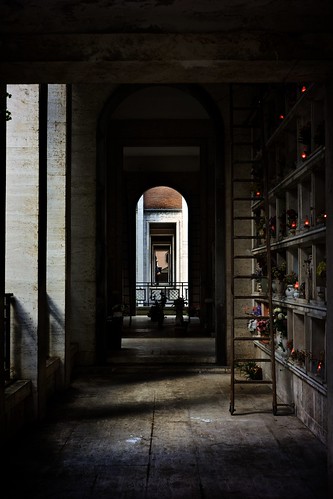 This is what the first of November has always been all about, here in Rome. It’s the day of the dead, when all families pay a visit to their deceased loved ones. I remember doing this every year since I’ve memories.
At first it was a kind of symbolic ritual in which I was just an observer. We would gather around the grave, my father, mother, and I, and say some prayers, words I could never remember for people I never knew, like my father’s father and my mother’s mother. Mythological people everyone in the family kept telling me stories about. It was always clear to me that a family exists because of its roots, that my parents needed to tell me about their parents as much as I now want Agata to know mine.
But then, suddenly, those graves were engraved with names I knew of people I cared about and missed. The very first was aunt Bruna, the sister of my father’s father. She never got married and lived her life with her brother, helping out with his numerous family (my father is the last of six). Being my father the youngest, she kind of adopted him as hers. And when I was born, I was immediately her favorite nephew. She died when I was seven, but I still remember her very vividly for how much she loved me.
Years later, my father gave me a little box. Inside there was a beautiful diamond ring, simple and elegant white gold mounting. With it a small piece of paper on which, with a wobbly writing, a few and heartbreaking words were written: “Per il mio Luca” (for my Luca). I remember my father telling me how Bruna never finished elementary schools, hence the writing. Then, he told me the story of the ring.
When her brother, my grandfather, died at the age of 57, Bruna received some inheritance. With that money, she bought herself the engagement ring nobody ever gave (or would ever give) her. That was her most precious thing, the symbol of the life she would have wanted for herself if it wasn’t so expensive, at that time, to have a wedding (just one of her five sisters married, two became nuns, and the other one remained unmarred too). And when she was told she was sick (it all lasted a few weeks, they found the cancer only very late) she went to the bank, took the ring and put those words in it. She wanted that ring to be an engagement ring, to make a girl happy, and she wanted that girl to be my wife.
When I gave Claudia the ring I told her the whole story, and I remember both crying for quite a while…
So, this is family, the love we get, the love we give; we grow from those roots until we find to be part of them, so that the new ones will have theirs, like a vine that climbs over time and history.