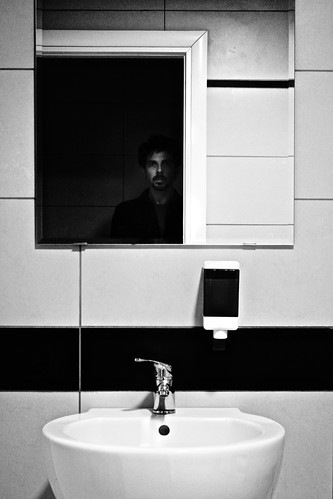 The day after (the concert). I was pretty down. I spent the day at my office, working on several ugly documents, answering to emails, but mostly yawing. By the end of the day I grabbed the camera and went to the toilet. There is something that always intrigued me about non-residential toilets. I mean, public toilets, toilet at clubs, bars, restaurants, working places, hospitals, schools, and so on. They are a separate place, like on another planet. There is no hierarchy in a working-place toilet. There are no social-class differences in a public toilet. There are no better students in a school toilet. I mean, what happens there is pretty much the same for every one. And it is something nobody likes to talk about, something everybody is somehow ashamed. When we randomly run into someone while at the toilet, well, we feel very uneasy, its all quick and gibberish courtesy talk, while we ran in or out of that little odd place. Maybe we even skip the hand washing part, just to get out as soon as possible. I mean, seeing the scene from the outside, it mustn’t seem so different than two colleagues running into each other while slow-driving on a prostitute-road…
Non-residential toilets are metaphysical places, where everything is just a metaphor of the unspeakable.