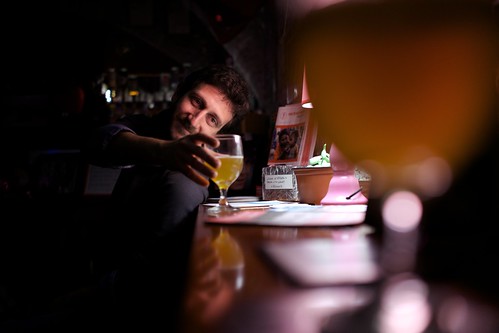 He’s my best-mate. One of few. He’s a musician and a cook, he owns the music school ARPA and is one of the partners of the restaurant-pub Four Green Fields. He’s an incredibly active guy, really passionate about his jobs, his life, and his friends. He just survived a really tough year, from which he came out stronger, wiser, and quite darker. He’s now a really nice guy with a profound dark side. And I love dark sides.
We know each other since more than ten years, but we became close friends more recently. We had a mutual friend which lived (and still lives) abroad, so we used to meet every time the mutual friend was in Rome. After a while we realized we liked our reciprocal company besides the presence of the mutual friend, and started “dating”. From that to a beautiful and solid friendship the step has been quite short, almost disturbingly short.
Around a year ago he took a serious, drastic, basically brutal decision, one that none of his closest friends would have ever expected, which messed his life up more than a bit. I won’t get into any details for his privacy, but at the same time I can’t talk about him without referring to this event.
Now, after one year from “the event”, I feel I know him better, and deeper. And I feel it’s because he got to know himself better and deeper. Whatever happens in life that results in knowing ourselves better, it is never for the worse, if anything for the better.