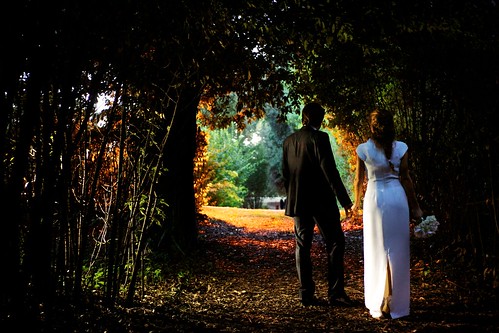 Today I experienced another deep immersion into a different culture, kindly offered by my wedding photography business. I spent the whole day deeply immersed into two Jewish families and I shot the (very) Jewish wedding between the two. Almost nothing was like I expected it to be, they are both Roman families and yet their culture is an extremely rich mix of Italian, Eastern European and Middle Asian influences. And so was the wedding. The bride’s dress and groom’s suite, as well as most of the decorations, were alike most of the traditional Italian weddings I am used to. The stage where the ceremony was held and the ritual itself, though, had more things in common with the Pakistani wedding I shot in London last May rather than with any Catholic wedding I ever shot. But then there are some gestures which are way more ancient than any Christian or Muslim wedding, like the glass breaking at the end of the ceremony. And when it happens, the band suddenly changes repertoire from classical music into Klezmer music, and everybody is happy and dances, even the Rabbis.
From that point on the dancing never really stopped. Everybody seemed to know how to have a great time, and nobody missed the opportunity to have some. The food was excellent, the decorations marvelous and the location, Villa Piccolomini, enchanted. So much that Simona and Alessio, the nice young bride and groom, asked us to capture the mood in a single, story-telling shot. We were in full twilight zone, and at the end of the dark wood there was this opened area lit by yellow and orange lights. I asked Francesco, the video operator, to use his lamp to cut some white light through the trees. And this is how and why this photograph was born.