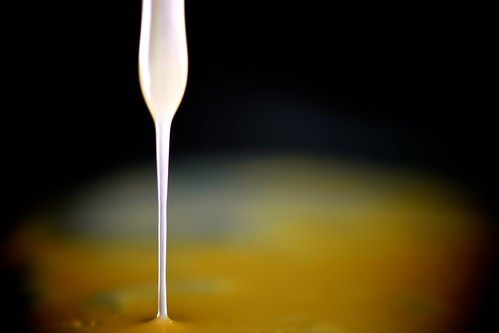 Today’s photo was a mess, literally. First of all, I have to keep in mind that I always have to do the math when trying something highly technical. “High speed photography”, for example, is so called due to the high speed of shooting. I know this sounds dumb, so I must be dumb if I spent the evening trying to get high-speed effects with “just” 24 frames per second. 24 fps are a lot and the NEX-7 is great for making it real, but it simply isn’t enough if you want to shoot, for example, a raw egg falling on a cristal table. If you are lucky you get just one shot in which you see the falling egg (and I wasn’t), than you just have a lot of photos picturing raw smashed egg. That’s what I’ve got. Now, that’s not what I wanted…
But, hey! You still have some squishy raw egg smashed on your cristal table, that’s not something usual, right? So get the macro lens and start playing with the liquid stuff, making it drop on itself, getting all dirty (you, the floor, the dog, and so on). Because drops are cool too, and you don’t need any real high-speed camera for shooting them. Just time and a lot of patience.