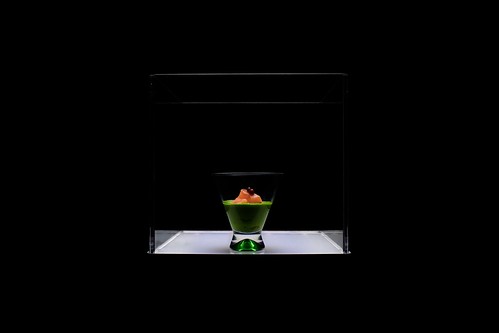 First day of “Metamorfoodist”.
I’m really glad to introduce the new monthly theme, the second one performed with the help of a second artist (the first one being “X/Y PROJECT”). This time I involved an excellent young chef, Lorenzo Mazzoni, which is also a one of my (few) real friends. I chased him for quite a long time, and it now seems I finally managed to start a food-photography project with him and (mostly) his creations.
We have quite a similar approach in what we do, even being photography and cooking apparently so different from each other. We’re both in the search of ways to take what surrounds us and transform it, even if for just a sensibly short time, into something else. Sometimes totally else. Others just a better and clearer version of itself.
And if you think about it, photography and cooking aren’t so different at all. In photography a four-dimensional world (being an engineer I take time as one of the dimensions) gets collapsed into a two dimensional one, and it is by controlling this transformation that the photographer gets to create his (photographic) art. A cook takes several ingredients, each of which has so many potentials, and by cooking transforms each of them into an amalgam which will be re-processed by the taste and smell senses of those who’ll eat his meal, and, again, it is by controlling this transformations that he gets to create his (culinary) art.
Transformation of portions of reality into a controlled and “higher” reality. This is what this theme is basically about. And since in both photography and cooking each thing gets transformed into something that is still very related to its original (you may turn a tomato into sauce, but it still tastes of tomato, and you may turn any shape into an abstract photography, but those shapes still resemble the original object), more than transformation we will be talking about metamorphosis.
Being the ones who induce metamorphoses, I guess we could be the metamorphosists. Lorenzo will induce the metamorphosis of ingredients into creative food, while I will induce the metamorphosis of his recipes into photographs. So, you see, we’ll be the “Metamorfoodists”…

All that said, let me introduce how this theme will work. Lorenzo will prepare and present a series of different menus (that is, a set of recipes for starters, first courses, second courses, side dishes, and sweets), and in each one of them he’ll develop a concept of his cooking art.
For the first menu, he wanted to immediately address the very core of this theme: the Metamorphosis. So this first set of recipes will all present courses in which the very same ingredient is used several times, but in different “states” (like raw, steamed, roasted, grilled, etc.), to show how the control of the transformations and the combining of them may create, even from the same ingredient, surprisingly new tastes.

And here’s what the Chef says about this very first recipe:
Tartare of Salmon’s Fillet with Ginger, EVO oil, Apple Cider Vinegar and Pink Pepper in Celery Sauce and Light Broth of Salmon (“Tartare di Filetto di Salmone allo Zenzero, Olio EVO, Aceto di Mele e Pepe Rosa in Salsa di Sedano e Brodetto di Salmone”).
The salmon’s tartare is minced with the knife to avoid that the heat of a mixer could ruin its aroma. It then gets immersed in an EVO oil emulsion, with a few drops of apple cider vinegar and a bit of pink pepper, and put in the fridge, where the maceration takes place. Head and remnants are overcooked with herbs, whipped, and finally sifted. This light broth, mixed with a mash tun of celery, is used as the base of the tartare.