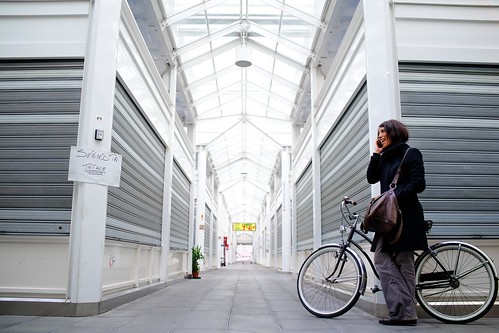 She’s my (current?) best girl-friend. We were friends at high-school, for a while, then we lost track of each other, for some reason I can’t happen to remember, or just for no reason at all. Even if we lived for years quite close to each other, we never met again, till a few years ago, at a new year’s eve party. That wasn’t the night of “re-bounding”, actually I think I spoke more with her husband rather than with her, just because we had the same dslr model. He liked my photographs, and we stayed in touch for a while. A couple of years later, they were both attending my first (and till now only – I hate not to have the the time to do everything!) workshop. That time we spoke a little more. Plus, she became “one of my students”, a very important attribute, because I happen to like all of my students…
Then, one year later, she called me to offer me a photographic job. I had just started the 365(+1) Days of NEX-7 and getting really serious about a drastic change in career, and at the same time she had just left her position at the faculty of architecture to start working on communication strategy, web design, and many other things. The economic crisis had just put us on colliding tracks.
We did that job together, and we fell in love. The four of us, luckily. Me, she, my wife, and her husband. Since then, we share as many jobs as possible, and we see each other quite often. She’s creative, dynamic, and a fearless optimistic. She’s fighting the crisis by doing many different jobs and being constantly on the move. You just can’t beat her. Best to be a friend of hers.