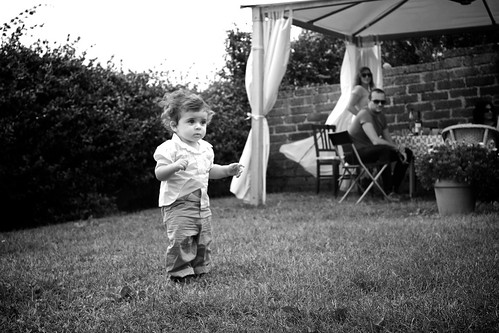 Agata learned how to stand still without any support this August. She took her first steps around the beginning of September. At that time it was all about taking a step (rarely two) to move from one support to another. Around ten days ago she went for the first series of steps. Since a couple of days she officially walks. She knows how to start and stop without falling and without support, how to turn both while standing or walking. She even knows how to dodge Lucy the dog which, “incidentally”, steps in front of her every time Agata tries to get to me.
So, when today she woke up from her afternoon nap just to realize that we weren’t at home anymore, but rather at Lorenzo’s, who lives in a small countryhouse, she started walking on the grass and never stopped. There was even a kitty and Agata tried to catch it (with very little success) every time she saw it. Which happened quite a lot, since the cat seemed to enjoy the game.
When we were back home in the early evening, she wanted to walk again, but this time she would keep her hands close to her body, not using the arms to balance. She was so proud she would sing while walking. It’s really an incredible show.
Now that she’s mastering the walking thing (or at least she thinks she does), she got obsessed with going up and down steps. She doesn’t seem to see how physically impossible the task is, since the steps are higher than her legs, and yet as soon as she sees a step she quickly toddles towards it and… well, until now we always had the reflexes to grab her in time and help her with the step, so I don’t really know what she would do if left alone.