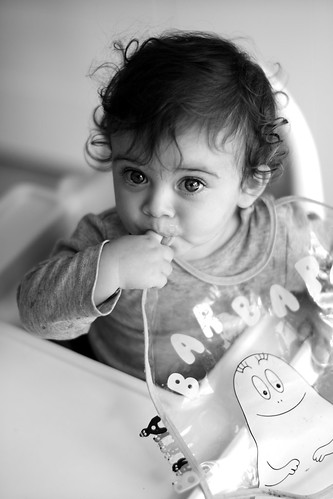 There’s a punishment that Virgilio forgot to include into his description of the circles of Hell. A torture able to savage both human’s body and soul at the same time. And, like in a terrifying horror movie, I had the chance to experience it in my life yesterday, when I decided to spend the Sunday afternoon at the mall, looking for a new microwave. Do you think this isn’t so horrible, after all? Try to do it with your daughter teething…
The morning started as it always does on Sundays: Agata woke up, happy to meet us after the sleep, we dressed up quickly and left home for a early morning walk among the Sunday market of Porta Portese. She begun behaving differently shortly after, when she made clear she wouldn’t stay any longer on her pram, and once picked up she would solely look for cuddles.
Back at home, the problem became more clear once she started putting her hands in her mouth, clearly picking at something which was bothering her. She was still quiet, though, had her lunch and fell asleep. At that point Claudia and I had the unfortunate idea to go buy a new microwave at the mall (I set the old one on fire). Since we changed home, we’ve never been at the nearby malls, so we thought it was a good idea to go and have a look.
The place was obviously ridiculously loud and crowded, the queue at the counters impossibly long, and when Agata woke up Hell finally raised on Earth. I won’t bother you with the descriptions of how she moaned and cried the whole time, how she could find peace only in playing with the most dirty and gross things she could find in the mall (and, believe me, there are so many), or how all this made basically unfeasible to sustain a conversation with the tech guy who was selling us the microwave. Those among you who have kids will immediately know as a fact what I am talking about. Those who don’t, well, they’ll just find this a funny story. I know I would have if I hadn’t actually experienced it.