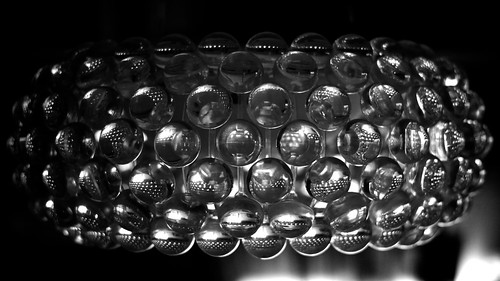 This chandelier is called Caboche, and it is designed and sold by the Italian company Foscarini. The company exists since the early 80s, it started in Murano, an island very close to Venice, worldwide famous for the ability of its craftsman to blow and model glass into any possible shape, size, or color. The company then moved to the mainland, and finally became one of the most important and well-known designers and producers of lamps, with more than fifty original designs, realized with many different materials, and a crew of thirty designers working on new models. Foscarini truly is one of the brilliant examples of what this messy country can produce when its creative potential is put to work.
Take this lamp. The company was looking for a model to re-think the classic idea of the Italian chandeliers, one of the main production of the glass blowers in Murano. Apparently the idea for Caboche came when one of designers found, in a flea market, a bracelet made of plastic drops held together by an elastic band. The drops became one hundred and eighty nine spheres of polimethylmethacrylate which surround a dome of white glossed glass enclosing an halogen lamp.
We got it for our wedding (with a few other lamps, we really do love lamps!), and it now lights the living room, hanging suspended over the table. What I love most of the lamp, is how the multitude of spheres reflect the light and what surrounds them, it’s an always changing show of perspectives and shapes.