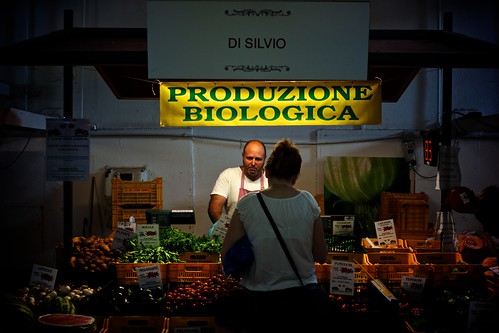 One of the things I loved most when we lived in the town of Leiden, in The Netherlands, was the Saturdays’ market. It would take place all along the central canal, the whole town would be there, selling and buying food, clothes, and all the possible amenities. I loved it because it was a nice way to spend the saturday morning, looking at the goods, eventually buying a lot of flowers, surrounded by people and music. As everything in Leiden, we didn’t have to drive to get to the market, it was just at a couple of minutes of walking distance.
Here in Rome there’s a major Sunday’s market, it is called Portaportese. It’ huge, it’s messy, it’s the realm of antiques, clothes, and everything that falls in between. It’s actually so big and crowded, that reaching it is an adventure, since you need to get there early in the morning to find a parking spot and to be able to walk through it without getting squeezed on the way.
Fact is, Portaportese is our new neighborhood, and the market happens just in front of our apartment building. So now, on Sundays, when Agata wakes up as usual at 7.30AM, we get quickly dressed, get out, and enjoy what for the rest of the Romans and tourists is a tough adventure. Needless to say, it’s full of stands selling old cameras, I even found a Russian guy which sells almost every kind of camera which was ever built in the old U.R.S.S.
There’s also another nice market, a little one fully dedicated to organic food produced in the countryside areas around Rome. It’s called “Farmer’s Market” (no idea why they named the market in english), it’s open on Saturdays and Sundays, it’s in Testaccio (five minutes walking distance from our flat) and it’s really a little treasure. We visited it yesterday and ended up buying incredibly tasty ham, excellent meat, super-fresh eggs, and pesticide-free vegetables.
I’m really getting in love with our new neighborhood, day after day it’s just getting better and better.