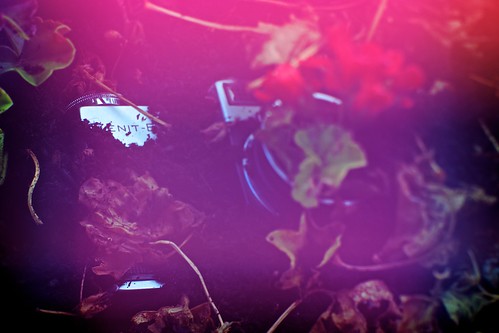 I buried my zombie Zenit-e, it’s now covered with soil and a flower grew out of its broken lens. Or maybe I seeded my father’s first slr, to see our legacy bloom, waiting for the day I can gather the crop and prosper out of it.
Whatever it is that I did, being it metaphorical or symbolic, fact is, the old Zenit is there, and today I wanted to shoot it. And I wanted to use the nokton. Now, as most of Voigtlander lenses, the nokton has quite a long close-focus distance. If I recall it correctly (I’m too lazy to walk over the lens and read it, or even look for it on google, which however would have taken me less time than writing this whole sentence), it should be around one meter.
I can’t shoot the Zenit from one meter because I want to take it from above and because to do it I should use a ladder just beside the edge of my terrace, and since I’m staying at the eight floor, there’s no way I’m going to climb over a certain deadly fall. So, I need to reduce the focus distance. Which is not impossible, but actually pretty easy, if you know the basic of optics.
Essentially, further you bring the lens, closer you focus. So, you detach the lens from the body, and slowly move the lens further and further, till you get the focus you’re looking for. The tricky part is to stay still with both hands, the one keeping the camera and the one handling the lens. However, when the distance from the lens and the body goes beyond a certain point (and it does very quickly), you get light leaking through the mount, and vintage-weird magenta shades on the picture.
Also, (and to do this last trick it is better if you unmount the ring adapter, so you have more freedom in changing lens position) if you don’t keep the lens perfectly perpendicular to the sensor, then you have weird-tilt-lens focus effects, since you focus plane doesn’t coincide with the sensor anymore.
So, with a bit of ability (and a lot of trials and errors), by handling your lens freely in front of the sensor, you can get three effects:
1) reduce the minimum focus distance;
2) produce light-leaking magenta shades;
3) misalign the focus plane on the sensor, in a tilt/shift lens fashion.
This trick works better with lenses built for systems with a short flange focal distance (as Leica M, M39, and Contax G) because you can easily limit the light leaking from blowing out the whole picture. With other lenses you’ll have to somehow shade the body, which gets usually awkward…