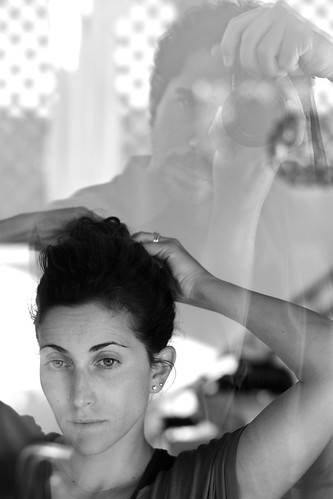 198/365(+1), a photo by Luca Rossini on Flickr.
Lens: Voigtlander nokton 50mm f1.1
Camera: NEX-7, ISO100, f2, 1/200, raw
The Nokton finally arrived. Well, to be precise, I finally returned home and put my hand on the Nokton, which was waiting for me since last Monday. I knew it was here in Rome, softly hold by its package, pure photographic potential, filled with the shots I yet have to take out of it. So, I’m sorry my holidays ended, but a new lens was here to cheer me up.
And what lens. It’s the Voigtlander Nokton, 50mm, f1.1. Yeah, it’s that fast. I struggled for a few months trying to figure out which lens was best to add to the collection. I wanted something for the NEX-7, something with superb optical quality, something that could provide the personality the Skopar has gifted me with so far.
Now, if you are a NEX-7 owner (or dreamer) you’ll know everything about the crazy effects that wide rangefinder lenses have on this camera. When I bought the NEX-7 I wanted to replace my Bessa R2 with a digital body, without spending the non-sense amount of money that a big-L asks for. There weren’t really many options, and the NEX-7 felt like the right choice. Fact is, I was using the skopar 35mm on the Bessa, and the crop factor of the NEX made me beg for a same-quality 24mm lens. But I wanted it to be fast, and pancake, and quick to operate with. Now, to be pancake it has to be rangefinder, but to be fast it delivers the crazy effects on the borders. There’s the pricy 24mm Carl Zeiss, off course, it’s f1.8 fast and quite compact and lightweight. I tried it and took very nice pics with it. But it’s designed to be an AF lens, I don’t really like the AF of NEX systems, so I still prefer to go for a rangefinder lens.
Then, in the last months, I realized that my photography was moving away from wide angles and falling (again) into the 50mm-85mm range, more or less equivalent to the 35mm-50mm range. Once I made my mind on this, choosing the new lens was quite straight forward. I don’t have (yet) the ridiculous amount of money required for the big-L ultra-luminous 50s, but luckily I could afford a second hand Nokton.
So, how’s the lens feeling. It’s too early to say, it’s obviously very different from the skopar, it surely isn’t a pancake, it isn’t too big or bulky either, MF isn’t as quick as it gets on the skopar, but it’s mandatory for a f1.1 which has to allow for fine focusing, and I keep looking for the focus ring when I handle it, but that’s because I have to get used to it.
So, I guess you’ll see a few more portraits in the next days, I’ll give you more info on the Nokton when I’ll have something else to say about it.