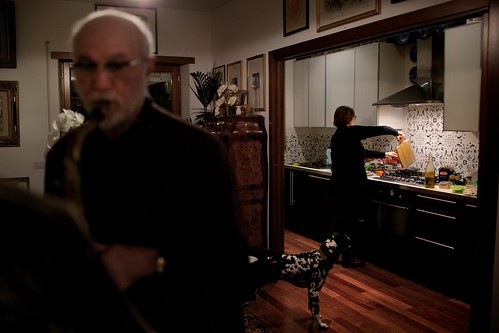 They are my parents. They are still together, after more than 35 years of marriage. I left home when I was 24, and my sister did the same five years later. So they now live together, alone, with the only other company of their dog, which is the son my dog. I can’t really imagine how they live their days without me or my sister with them.
To me, they have always been like an indivisible unit. I know how to cope with them, but only as a couple. There are things I tell my father, others that I tell my mother, things I can ask only to one of the two, if one of them is reluctant to tell me something I usually find the other more willing to talk, and so on. I’m not sure I would know how to relate uniquely with just one of them. Most probably, I would not. Which is something that is starting to scare me.
Anyway, he’s my father, a professor of neurology, the hardest worker I know, the one who brought me (without really pushing me) into my past scientific career. He’s an early bird, usually working from half past seven in the morning to half past seven in the evening. But when he’s not working, he either walks out the dog (his “third son”), or plays some jazz with his saxophone.
She’s my mother, an architect and a manager in the Roman town hall. She is a brilliant, stubborn, and incredibly energetic woman, and when she isn’t working she either fixes any issue my sister or I may be experiencing (and told her about), either uses her fantastic green thumb on her multitude of luxuriant plants, or cooks some delicious meal. She’s the one who instilled in me the passion for food and cooking, the worst of my pleasures and pains.