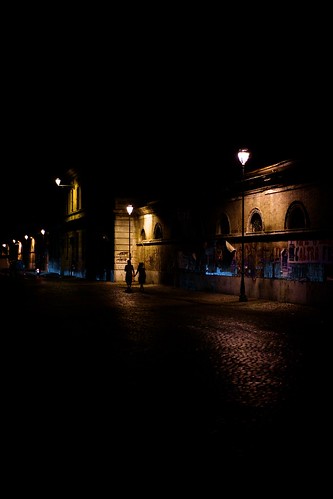 Testaccio is probably the coolest neighborhood of Rome. Most of the city’s best restaurants, clubs and bars are here. The streets are nice to walk around, kind of dark and yet not (too) dangerous. The heart of the cultural life in Testaccio is an old slaughterhouse, the Ex-Mattatoio, now converted into a University (Roma Tre), a museum of modern art (MACRO), a fair-trade market (Città dell’Altra Economia), and a large squat (Villaggio Globale).
Yes, the slaughterhouse was that big. It was so big, in fact, that a large number of the people living in Rome was employed there. According to my aunt Paolo, the terrifying and almost-human screams of the pigs being slaughtered where well audible from everywhere in Testaccio. The place has been shut down relatively recently, just in a1975.
Here’s another cool fact. The workers in the slaughterhouse were paid with currency but also “gifted” with the part of the animals which wouldn’t go to the market. Since cows were divided into “quarters”, the remaining part was called “the fifth quarter” (“quinto quarto”): it consisted in everything from the interiors of the animal that was eatable, like tripe, kidneys, hearth, liver, spleen, sweetbread, brain, and tongue.
In the years, the women invented incredibly tasty recipes to cook all the stuff their husbands were bringing home for free, this way creating what is now the typical Roman cuisine, a rich menu that offers unique meals like the coda alla vaccinara (the tail of the cow), the cervella fritte (deep fried brain), the pajata (small intestine), fegatelli all’alloro (liver with laurel). I know they can sound sickening, but they are actually delicious. And needless to say, Testaccio is the best place where to taste any of these recipes.