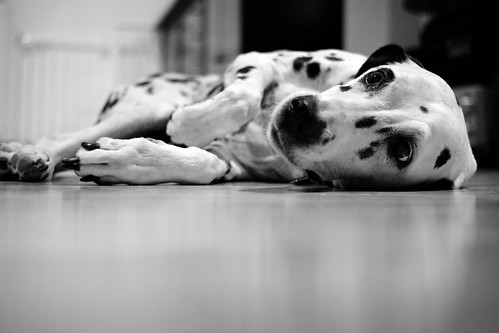 My dog Lucy gets fourteen years old this August. She’s with me since I started my engineering studies, she’s with us since the story between Claudia and I started, she’s followed us in the Netherlands when we moved there for two years, but only after giving birth to four beautiful mongrel puppies, sons of her and a white-and-black mongrel dog which lives in the countryside where’s our summer house. She stayed there with my parents the summer in which Claudia and I got married and left Rome for a month long honeymoon in Australia, she must have been bored so she found the dog that mostly resembled a dalmatian and had some fun. My parents kept one of the puppies, my sister named it Snoopy, and he’s now my father’s faithful companion.
Going back to Lucy, after the Netherlands she returned to Rome with us and since then she changed home three times in four years. It’s not easy for a dog of that age to keep moving from place to place, but the worst had yet to come. A little human puppy named Agata was going to invade her happy intimate life with us, stealing most of the cuddle and walking time we used to have together. In the last year she also lost most of her hearing, so she spends large part of her day sleeping in her kennel, occasionally barking at ghosts (i.e. intruders she thinks she hears).
But now that Agata is at the summer house with her grandparents, Lucy is again the queen of the house, she knows that, so she follows me wherever I go and whatever I do, getting attention and cuddles from time to time, till at night we both lay down on the parquet and watch TV. Like in the good old times.