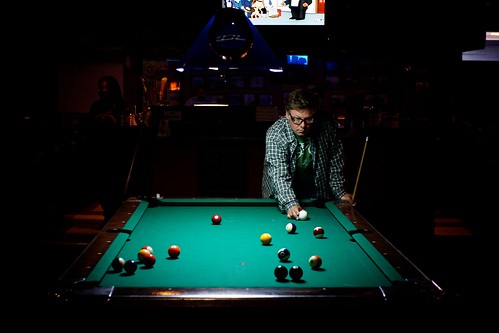 After four days spent in the wilderness of Kodiak National Wildlife Refuge, now that I know what’s “out there”, it seems somehow easier to me to understand the people who live here in Kodiak city. Almost all are coming from elsewhere, mostly from other U.S.A. states, and what they are looking for is a frontier country, a place where freedom has a capital F, like in the old days, when America was firstly ruled by simple and brave workers under the basic societal rule of “live and let live”.
Anyway, today is sunday, the little work we had to do was settled in the morning, and now we’re facing a lazy afternoon. In a city of fisherman and hunters there’s not much else to do in days like this than going to a bar and playing pool. Not that there’s anything wrong with that, it’s actually pretty enjoyable. Tomorrow we’ll all have to fly (with a lot of connections) back home, so here we are savoring our last hours in “The Last Frontier”.