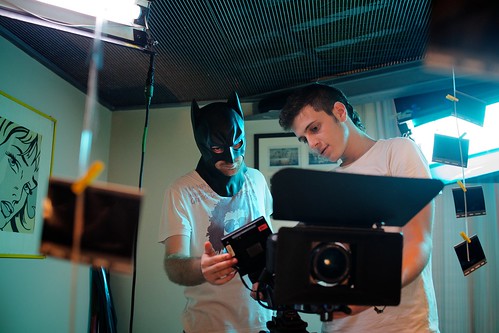 Eighteenth day of the “I’m Batman” theme, Summer is cooking up the city and its citizens with(in) it. Of course, most houses, offices and cars are nowadays equipped with air conditioners, so the heat hits almost only while walking from one of these places to another. But there are a few (very unlucky) situations in which the use of air conditioners is impossible. Like, for example, on a movie set in which there are hundreds of polaroid pictures hanging from the ceiling, which the director doesn’t want to swing around due to the air current. Now, in such a scenario, you should add to the heat the effect due to the 4000-6000 Watts of studio lights used on the set. Sure, you get a fantastic atmosphere and a great photography, but you quickly overtake the 40°C too.
Here comes the Bat-Director which, despite the utterly sweating troupe, shoots the Bat-Movies and saves the entertainment for the Summer.