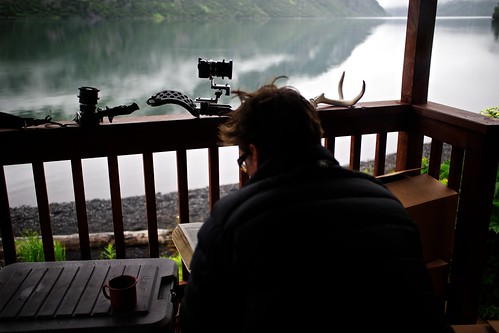 You don’t tell Alaska what you want to do, Alaska tells you what you can do. With this Hollywood-ish sentence, one of the guys finally settled the dispute arisen within the cabin crew on how to proceed (or not to proceed) with the scheduled shootings. Since this very early morning, a super dense fog has been covering the whole lake and the surroundings, while an icy rain goes intermittently on and off.
Once we finally accept the fact that we are basically stuck, we all end using the time for some rest. Someone takes a nap, another cooks tacos, while the rest of the crew immerse themselves into some reading. I am currently in the middle of “The Gospel According to Jesus Christ”, an incredible book that played a crucial role in earning José Saramago the Nobel Price for Literature in 1998. It is a courageous and astonishingly vivid picture of the (possible) life of Jesus Christ, a piece of supreme literature the reading of which I seriously suggest to anyone living on this planet, regardless his/her religion, age, or political view. If you are wondering how the Roman Catholic Church welcomed the novel, well, they refused it as a “substantially anti-religious vision”, demonstrating once more how myopic and ultimately illiterate they can be.
We spent the rest of the afternoon trying to catch some dinner. I guess that when the weather goes dumb, so does the wildlife, because fishing has been much less profitable today. Where yesterday in two hours we got a couple of splendid trouts and two big salmons, today it took us some serious time and effort to collect four medium sized trouts. Luckily, one of the guys is a camp-chef, and he managed to cook an excellent dinner despite all. Time to get some rest now, if the weather is fine tomorrow is going to be a pretty active day.