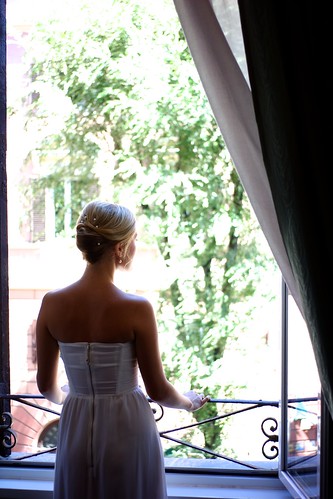 Sometimes I get immersed into worlds so different from mine that I don’t know what to expect. Take today. We were the photographers of the wedding of a very young couple. He’s Italian, she’s Russian, Muscovite to be precise. As usual, we started the assignment by shooting the preparation (make-up and dressing) of the bride. Since her parents came directly from Moscow, the bride decided to have the preparation at the same hotel where they were staying.
So, in a hot Roman Friday of July, I found myself in a hotel room, deep in the city center, with four Russian ladies, Grandma, Aunt, Mother, and Bride. Like an exploded matryoshka, these four beautiful look-a-like ladies filled the torrid hotel room with their swift Cyrillic chatting, vividly looking at each other with their incredibly icy blue-green eyes. Outside of the room, in a dark hall, dimly lit by neons hanging from the roof, the males (Father, Aunt-1, Aunt-2) sat nervously, barely talking any words, their images reflected infinite times by the wall-mirrors that covered three out of four walls in the hall.
The fact is (and I didn’t know) that the bride’s family has to put on a sort of event in which the father tries to give as spouse a different girl to the groom, and when the groom finds out he’s asked a ransom for his love. Obviously it is all played out in a comical fashion, but the thing is, this groom doesn’t really speak Russian, neither the Russian family speak any Italian (besides the bride).
So, when Groom arrived along with his family, the mood quickly turned into a chaos of chatting, gesticulating, kissing and hugging. Groom eventually understood that he had to figure out behind which curtain was Bride being hidden (and that his family would have had to pay if he got it wrong). Father helped Groom quite a lot with all kind of explicit gestures, winking and pointing, till finally Groom heroically uncovers Bride, and again the chaos with all its chatting, gesticulating, kissing and hugging returned. Both families gave each other traditional good luck charm presents, like the garter from the Italian family to Bride, and Orthodox icons from the Russian family to Groom.
The rest of the day went on as usual, with a civil ceremony, photo-shoots in the city center, and the reception in a very nice villa on the top of Manziana hill which faces the lake of Bracciano, Villa Clodia. But those few hours spent taking portraits of a Muscovite family will remain with me forever.