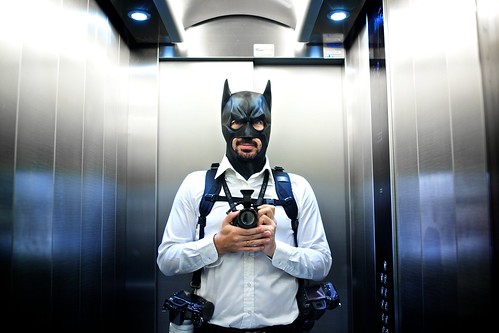 Sixth month of the “365 Days of RX1: one camera, one lens, 12 projects”. Sixth theme: “I’m Batman”.
It doesn’t mean that I AM Batman, even if today I am. It means more like anyone could be, or even just feel like him. While looking at these shots, try to imagine the subject portrayed, usually at his job or while performing daily duties, saying “I’m Batman” with the same husky, dark, intense, testosteronic voice of Christian Bale http://www.youtube.com/watch?v=n4qgTk8Vfyc (even if the one of Jim Parson would be probably more adequate… http://www.youtube.com/watch?v=diQHV_ZFyqY).
Nothing too serious this month, actually the opposite. I’ll ask random people (and a few friends) to wear the mask while on duty and pose for a portrait. At the end we’ll have thirty-one different Batmans, each doing a different job in the city. Cause nobody knows the masks we wear inside. Anyone could be the Batman, literally.
So here is the first shot of the theme: the wedding-photographer Batman in the elevator on his way to work.