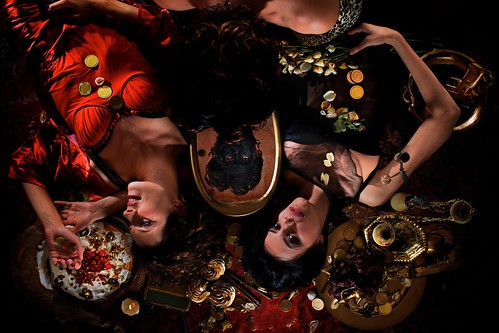 Mario Sgueglia, Actor/Director/Artist. Creative Guest of the X/Y PROJECT.
As you should already know, Maura and I didn’t ask Mario what was his dichotomy, but we gave it to him. We did it because we wanted to have, as the thirteenth guest of the dinner table which collects the X/Y PROJECT, the most famous thirteenth guest ever and, with him, the the biggest human dichotomy ever. This way,at the exhibition at Chiostro del Bramante in Rome, we opened the project with a “first dinner” which was also a Last Dinner, with thirteen guests and twenty six photographs.
Now you see, if the thirteenth guest had to be the Christian messiah in the Y plane, then the X plane had to be its opposite, the evil itself. Because we, as humans, can be as good and pure as the son of God itself, and as bad and evil as the Devil.
The reason why we asked Mario to do this work, instead of just doing it ourselves and then finding a model to play them out, was because we needed him for more than “just” the shots. You see, at the opening of the exhibition at Chiostro del Bramante, after the audience had already seen all the first twelve characters in their twenty four portraits, we had Mario “living” the transition between the two planes of good and evil. He created, directed, and played a live performance in which the two photographs worked as the starting and ending point.
At the time X/Y PROJECT was exhibited at Chiostro del Bramante, another (way better) exhibition was on (and still is): the paintings of the Brueghel dynasty. Among the many masterpieces showed at the museum, there was “The Seven Deadly Sins and the Four Last Things” of Hieronymus Bosch. So, Mario told us “Why don’t we show the evil as the man who lives all the sins?”.
Around this idea we first staged the X plane shot, and then worked on the live performance for the opening. Especially Mario worked on it, together with his “crew”: the actors Gianluca Soli, Michela Bruni (in the photo), Chiara Ricci (in the photo), Luca Guastini, Azzurra Rocchi, and Monica Volpe, which gave life to the seven sins and the redemption of the man who can always became the “lamb of God”, and Andrea De Giuli, who did a fantastic job in recreating the lights and atmospheres we set for the photos during the live performance.