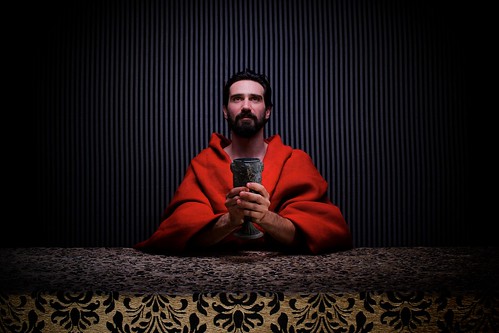 Mario Sgueglia, Actor/Director/Artist. Creative Guest of the X/Y PROJECT.
With Mario and his character the X/Y PROJECT worked in a slightly different way. Well, more than slightly. We didn’t ask him what was his dichotomy, Maura and I. We rather told Mario what he had to work on. To create two characters on a given dichotomy. Then to tell us how he imagined it. Then we worked on that vision to implement it in our Y and X planes. Why did we do all of this? The answer is simply in the number. This is the thirteenth character of a dinner table. A table with thirteen guests is, in the Cristian world, sign of very bad luck. Because the thirteenth is going to die. As Jesus Christ did, more than two thousand years ago. He was the thirteenth then, he’s the thirteenth here, today, for the X/Y PROJECT.
Maura and I prepared the first exhibition of the X/Y PROJECT, which stayed until a few days ago at the Chiostro del Bramante (one of the finest art museums of Rome), so that it would present the first twelve of our characters (the ones I’ve been publishing for the last twenty four days) plus the symbolic thirteenth, this way bounding this first dinner of the project to the Last Dinner. Therefore, the thirteenth had to be the messiah, at least in the Y plane. The X plane had to be its opposite, the evil itself. We wanted make this first dinner like the Last Dinner so to include straight away in the X/Y PROJECT the biggest human dichotomy ever, our inner ability to be as good and pure as the sons of God itself, and as bad and evil as the Devil.
So, you see, Mario came to us with the idea that in his Y plane he would have given away all the food, the furnitures, the rich ornaments, even his clothes. He would have been covered by a mere cloth, and he would be sitting in the gesture of offering the last and only of his belongings, a glass full of wine. The reason why we asked Mario to do this work, instead of just doing it ourselves and then finding a model to play them out, was because we needed him for more than “just” the shots. But I won’t tell you what today, for that you’ll have to wait for the other shot, which I’ll publish tomorrow…

The reason why we asked Mario to do this work, instead of just doing it ourselves and then finding a model to play them out, was because we needed him for more than “just” the shots. You see, at the opening of the exhibition at Chiostro del Bramante, after the audience had already seen all the fisrt twelve characters in their twenty four portraits, we had Mario “living” the transition between the two planes of good and evil. He created, directed, and played a live performance in which the two photographs worked as the starting and ending point.