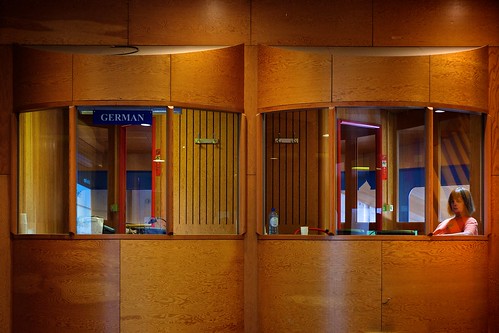 Large conference rooms at ESA have little rooms for the interpreters. They always made me laugh when I was working here. First of all, I think I saw them only in the movies from the 70’s (besides “The Interpreter” movie, which is more recent). Secondly, I find ridiculous that in 2012 we still have leaders which do not speak English, a language that any scientist is obliged to learn during his studies.
The conference at ESA is now at its end. While yesterday the event was organized in the form of an un-conference, today it has been much more standard. There were some technical talks of ex-ACT members or professors which collaborated with the ACT about some of the research lines that produced extended innovation. Then there were the inevitable political talks, nothing exciting but yet all converging to the (current) mainstream idea that unconstrained innovation is nowadays a fundamental ingredient of the cure for the European economical and political paralysis. The Advanced Concepts Team is the best example of a low-cost/highly-effective group when it comes to unconstrained, out of the box, controversial, dynamic and multidisciplinary research.
What the bureaucrats don’t understand is that they can’t ask groups as the ACT to apply their model to save the world. These groups work because of the weird, brainy, sometimes sociopath, unrestrained young researchers that work in it for maximum three years. They are able to think out of the box because they live out of the box. Some of them were never in that box, they have no idea of what is inside it. We can’t ask them to save the world because such a task becomes immediately unbearably boring because of the (stupid) limits imposed by politics, inter-ministerial agreements, economical fluctuations, and the-sudden-brain-death-as-soon-as-you-approach-it bureaucracy.
The human race will always have smart scientists on its side who will always be ready to play their fundamental role to produce new tools to raise societies out of the dark ages. But scientists have to be properly led for these changes to occur quickly and effectively by leaders that will take care of all the shit that the world has been filled with. Dark ages require smart leaders. And they are as rare as hen’s teeth, and few and far between.