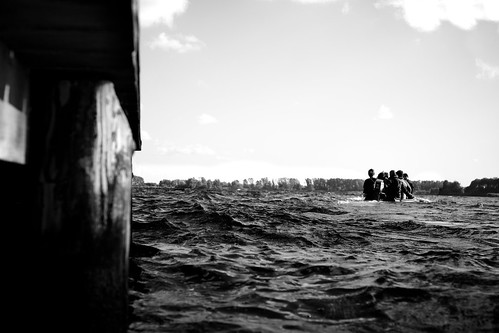 Back in the old days, today. We relaxed at home in the morning, than a couple of Italian friends which now lives in Madrid came and visited us. After lunch we all moved to the first of the “10 years of the ACT” events, a barbecue on a lake near Leiden, where all the ex ACT members and their families are invited.
The ACT, which stays for Advanced Concepts Team, has been my most important school in science. I arrived there as a stagier, in 2006, to work on “liquid ventilation and water immersion for human acceleration sustainability”. Space exploration was my dream job when I was a kid in high-school. I actually wanted to study astrophysics, from which I was talked out by a famous physicist, who suggested me to go for aerospace engineering instead. I couldn’t bear all the topics on engines which that course included (I am still almost completely ignorant when it comes to engines), so I ended up signing up for computer engineering, just to change course one year later for biomedical engineering. I was so happy when, at the end of my studies, I could yet find a job in the space sector.
After the internship I won a position as young graduate trainee on bioengineering, during which I studied how to apply brain-machine interfaces to space applications. It payed me off with a book published with Elsevier on my topic of study and the incredible experience of microgravity on a three days parabolic flight.
But more than anything else, those two years introduced me to the most amazing people I ever met. And every time I have the luck to be back and I happen to meet the new ACT members, they’re always incredible people. More than anything else in the world I would like to come back here and work, forever, in the group. Unfortunately, it is almost impossible. Only two staff members have the honor to coordinate the bunch of crazy research fellows, YGTs and stagers that compose the ACT, and becoming one of them is more difficult than winning 50M€ with the lottery.
So, the daily pic is about the current ACT crew, all packed in an almost-sinking rusty boat, an incredible group of weird brainiacs, sailing from the barbecue back to Leiden through the Dutch canals…leaving us behind, again.