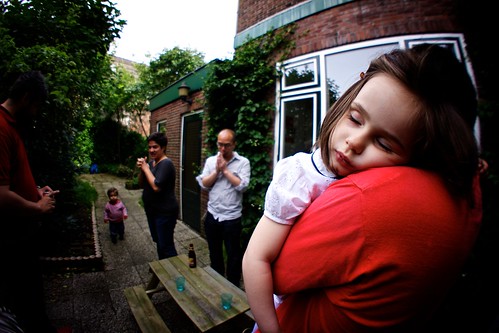 The official reason why we came to visit Dario and Francesca in Leiden together with a bunch of ex ESA colleagues is to take part to their daughter’s third birthday party. Almost everyone of the old crew got babies in the last four years, so the party was as messy as babylon immediately after the fall, with babies (and their parents) screaming in Italian, Spanish, French and Dutch.
We are still managing, even after four years since almost all of us left Leiden and spread around the world to get multiplied, to see each other at least once a year. It’s always very nice, very nostalgic, and highly alchoholic.
Today’s photo couldn’t be anything else that a portrait of Valentina, the little Italian girl which is growing up in The Netherlands, and which just turned three today. We all arrived on Thursday and since then we’re mostly talking to her about the birthday party. She got so excited that when the party finally started, she was so exhausted that she fell asleep.
She slept almost through the whole party, but luckily woke up just in time for the cake ad some final playing. Afterwards we all put to sleep for the night our kids, and then started partying like in the old days, with beers, single malt Scotch whiskey and lighthearted chatting.