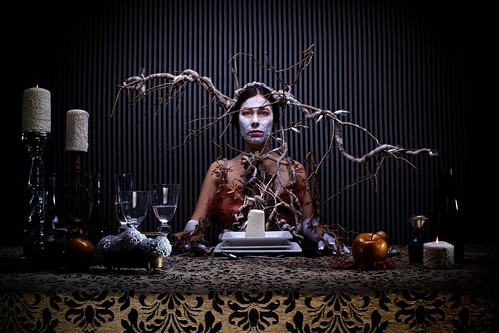 Another day, another character. She’s Marianna Giorgi, one of the participants to the X/Y PROJECT and, as such, one of the “Creative Guests”. Fact is, being it an open and collaborative artistic project, Maura and I decided to give to each of the participants a credit in the project. Because our subjects aren’t mere models who get dressed up and placed in front of the camera for the shot, but rather a big part of the creative content of their two portraits and, as such, of the overall project’s meaning. Whoever participates to the X/Y PROJECT becomes a creative guest. As simple as that.
Now, among many other things, Marianna is a brand new mother. Very brand new. And as any, she’s just been experiencing the biggest and most meaningful human transformation ever. The one that takes a girl and, through months of deep emotional and physical modifications, makes a mother and a child out of it.
Marianna felt this whole experience somehow reflected the winter and spring in human life. The emotional detachment from life and time and the stillness of self concentration are winter’s features. Which get blew away by spring, as we’ll see tomorrow.