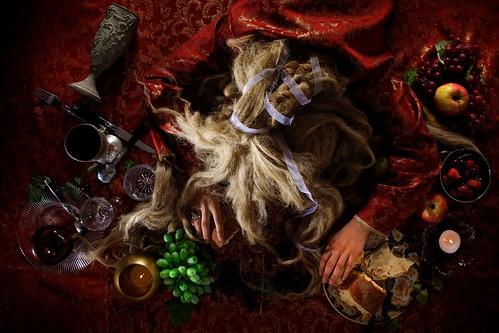 As I tried to explain yesterday, the X/Y PROJECT consists of a series of couples of modular portraits, each couple representing the same subject as two distinct characters, both visually depicting, from a symbolic and iconographic point of view, a personal dichotomy. You can find a basic explanation of the project, with some visual schemes of the two different perspectives used to represent the “infinite dinner table”, on the project’s blog page.
So, as the second day of the X/Y PROJECT theme, today I’m posting the second shot from the project, which also is the first view of the “from above” perspective. The subject is again Maura, the other artist which, with me, “owns” the artwork concept and execution. She’s lying over the “different” table, in a “different” costume, so telling a “different” story. This is the other extreme of her “soul’s cardinal axis” from what we saw yesterday depicted in her Y portrait as a grey, monochromatic, intellectually creative, cage.
She “wore” the scenery again to consistently visually reflect her connection to the project. But this time she’s free to handle her creations, earthly creations. Her hairs are free and wild “oakum dreadlocks”, because oakum is an earthly material which needs the hands of an artisan to develop its full potential. Her hands this time are free and clung to simple, homemade bread. Because Maura feels that when she leaves her intellectual world of ideas behind and gets her hands dirty with the raw materials, she’s finally able to produce.