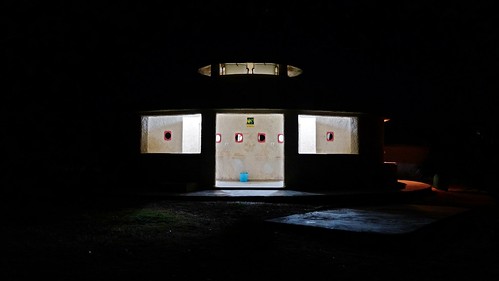 Isola delle Correnti. Deep south in Sicily, that is, deep south in Italy, that is, deep south in Europe. Fact is, this place claims to be the most Southern camping of Europe. Surely, it’s one of the weirdest. Take the toilets, for example: one of the common facilities of the camping, is also one of the strangest structure I’ve ever encountered, and at night its resemblance with a U.F.O. gets almost astonishing… And the rest of the camping isn’t less weird, I think I’ll post some other pics in the next days.
Post production with Photo Forge 2 (this last week should have been devoted to Photoshop Touch, but it saves images no larger than 12 Mpx and I’m not fine with downscaling so much the 24 Mpx RX1’s jpegs). Cropping, sharpening, and a bit of shadows and highlights tuning. Basically I “opened” a bit the lights and the shadows. Ah, and this is a 3200 ISO directly shot in jpeg. I still can’t believe how good this camera is at such high ISO…