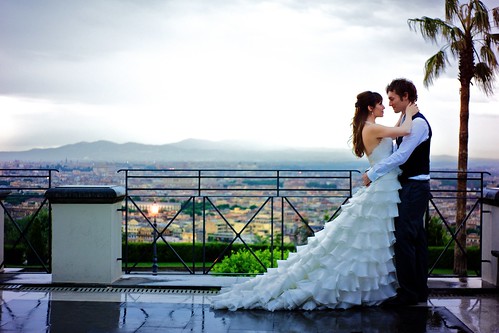 Beautiful wedding. Beautiful couple. Beautiful locations.
This was a well planned and long awaited wedding. I already spoke about it the seventy second day of the project (it was the 23rd of April), when we met the couple at the church they’ve booked for the ceremony, Santa Maria in Trastevere, probably my favorite church in Rome.
Let me tell you how this wedding went. First, I drove Claudia to the bride’s parents’ place, where she started taking photos of the preparations. Then I drove to the groom’s place, so to take shots of his and his family preparation. This is maybe my favorite part of the wedding photo-shoot, because it is very emotional and cosy. When I finished with the groom, I returned to the bride to help Claudia with the wearing of the dress. This is the top of the emotional and cosy moments in a wedding: only a few people are allowed to be present at it, and the view of a fully-dressed bride inevitably moves all the presents and the bride herself.
We waited for the car to pick her up. I don’t know anything about cars, so the best I can tell you here is that it was a cream-white Rolls Royce. Gorgeous and classy. Then we drove to the church. The ceremony was rather quick due to the sensible delay of the bride. It wasn’t her fault, though, it was the Rolls that arrived late at her place.
Out of the church, in the hearth of Trastevere, we had a walk with the couple and a handful of mates through the characteristic roads of the neighborhood, till reaching Ponte Sisto. Then a quick stop at the top of Gianicolo. Eventually we reached the reception venue.
They chose Villa Miani. It’s one of the most amazing villa’s in Rome, Villa Miani, which has a breath taking view of the city. There we took this last shot of the couple before they entered the reception and were sucked into the party. It had just stopped raining, the floor was all wet and the sky quite dramatic. The old city seemed to stretch out till the mountains in the background. And they were beautiful and in love.